The Heart by Kate Stewart (a review) 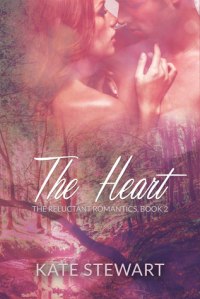 WOW! WOW!!!! I finished this beautiful masterpiece in one sitting. Gosh! I am so in love with The Reluctant Romantics Series. This book can be read as a standalone but I highly recommend you read The Fall and The Mind (novella) first because it will give you a little bit of background on the main character Rose and why she is the way she is now.

I fell in love with Kate’s writing in the first book The Fall – a second chance romance story of Dallas and Dean which has a HEA. In the mean time my heart was absolutely shattered for Dallas’s sister, Rose. After Grant, I was a little nervous about the author recreating the perfect hero but NO WORRIES here. Kate Stewart not only created a phenomenal character, Jack but also an extraordinary love affair.

“So if your tender heart grows weary beating for the burden of keeping us both, I’ll keep my eye on the clouds, and remind you of the lightning that brought us home.”

Rose lost her fiancé Grant in a car accident only 1week shy of their wedding. Rose decided to throw herself into family and work – trying to finish her surgery residency program while at the same time building the Center dedicated to helping cancer patients. To everyone’s eyes it seems that Rose is moving on with her life but Rose is certainly not. There is a difference between keeping someone’s memory alive and not letting go of the past. I think for Rose it’s the latter. Rose is living in a life that was supposed to be built together with Grant – the house, the lake, the land. Everything surrounding Rose reminds her of Grant. Rose has accepted Grant is gone but she could never stop loving him. Is she really living?

“My life had started a long time ago and had begun to leave me behind.”

Jack is a family friend who was sent by Rose’s father to help design and build the Center. Jack is handsome, sexy, and a little bit of a wanderlust. He travels all over the world only working with Rose’s father to pay his way. But Jack hasn’t always been that way…. What makes him trade in his desk job to see the globe? Well, Jack has a secret past too that makes it extremely painful for him to deal with rejection. I love that Rose and Jack’s relationship begins with friendship full of funny, flirting banters. There are parts where I was laughing so hard (the golf cart one). Rose is attracted to Jack right from the start but can not get past the guilt to completely commit to Jack. Out of respect for Rose’s father, Jack wants to keep his distance as well. But the chemistry between them proves hard to resist. The love scene is definitely STEAMING HOT – Kate Stewart does not mess around when it comes to creating a panty-dropping worthy love scene (I need to get on a bike sometime soon ). I really love Jack’s character – he is so patient, caring and kind. He understands there is something holding Rose back that she is not ready to share. For Rose, I think to share that part of her life feels like ending the love she has for Grant. Can she ever be able to move on or will it be to late when she finally realizes the love she deserves is in front of her?

This book is written flawlessly. Kate brought out so many emotions in me while reading this book. The story was funny, sweet and light-hearted at first. Then it turns into a sexy, angsty love affair. The letter – oh the letter and the good bye totally gutted me. Rose was conflicted and rightfully so … I was wrecked for her. I wish I could take away some of the pain and burden off her shoulders so she can love freely and “live a little”. And Jack, I admired him so much. He loves Rose and is determined to do everything in his power to deserve her love. It was hard seeing him feeling like he could never measure up to the one that came before.

“We fell in love in a lightning strike, an anomaly in a sea of lost people.”

I hope you enjoy this series as much as I did. Kate gave such a sweet, perfect ending to the series. Amazing characters, Rose and Jack. I also enjoyed the two friends of Rose – they are so funny, adding that light-hearted aspect to the story. Superb writing and an epic love story in my opinion. A MUST READ!!!!

For the last ten years, I’ve roamed the globe, captivated by the world around me. I’ve seen the seven wonders and admired sunsets from every continent. I’d lived and loved and that was enough for me. It would have to be.

I was content, satisfied with my collection of experiences . . . until a phone call led me down a road less traveled.

If I’d known my fascination would pique and be forever quenched only a few hundred miles from where my curiosity had been born, I may have never set sail.

Stripped of the future I’d planned with the love of my life, my family and my career were now all that mattered. I’d lived and loved and that was enough. It would have to be.

I struggled to move forward, to discard the part of me that held out hope for my obliterated heart. But I was bred a romantic, so it was easier said than done.

The odds of being struck twice are 1 in 9 million.

I risked those odds every minute, often cursing the dark sky, praying for static and a rumble of thunder, but it never came.

No, that second bolt hit me on a clear day.

The Reluctant Romantics Series
The Fall
The Mind 1.5 (Novella)
The Heart

Books that compliment the series (Room 212, Never Me.)