The Fallen Prince by Amalie Howard 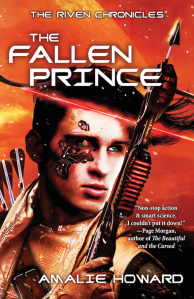 Riven has fought for a hard-won peace in her world, and has come to shaky terms with who and what she is—a human with cyborg DNA. Now that the rightful ruler of Neospes has been reinstated, Riven is on the hunt for her father in the Otherworld to bring him to justice for his crimes against her people.

But when she receives an unwelcome visit from two former allies, she knows that trouble is brewing once again in Neospes. The army has been decimated and there are precious few left to fight this mysterious new threat.
To muster a first line of defense, her people need help from the one person Riven loathes most—her father. But what he wants in return is her complete surrender.

And now Riven must choose: save Neospes or save herself.

AMALIE HOWARD grew up on a small Caribbean island where she spent most of her childhood with her nose buried in a book or being a tomboy running around barefoot, shimmying up mango trees and dreaming of adventure.
An aspiring writer from a young age, Amalie Howard’s poem “The Candle,” written at age thirteen, was published in a University of Warwick journal. She was also a recipient of a Royal Commonwealth Society essay award (a global youth writing competition). A Colby College graduate, she completed simultaneous Honors Theses in both French and International Studies, and graduated Summa Cum Laude/Phi Beta Kappa. At Colby, she was cited for research and criticism in Raffael Scheck’s article, “German Conservatism and Female Political Activism in the Early Weimar Republic,” and his subsequent book, “Mothers of the nation: right-wing women in Weimar Germany.” She also received a distinction in English Literature from the University of Cambridge, A-level Examinations as well as a certificate in French Literature from the Ecole Normale Supérieure in Paris, France. She is a member of SCBWI.