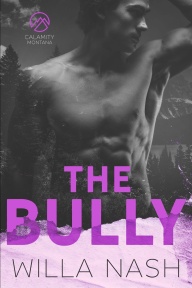 Nellie Rivera is trading traffic for tranquility. When the quiet streets of small-town Montana beckon, she leaves Denver behind and moves to Calamity. It would be the perfect adventure if not for Cal Stark.

When her archnemesis dares to show his face one Saturday morning, declaring he is moving there too, she vows to make his life a misery. The town isn’t big enough for the both of them and besides . . .

She was here first.

Cal has been a thorn in her side since high school. He might have bullied her back then, but she’s not a modest teenager anymore and has learned a few plays of her own. If all goes to plan, she’ll run the former pro quarterback out of town within a month.

There’s only one problem. Cal has the same plan. He wants Calamity bad enough to pull out all the stops. And after one kiss, she realizes that he doesn’t play fair. 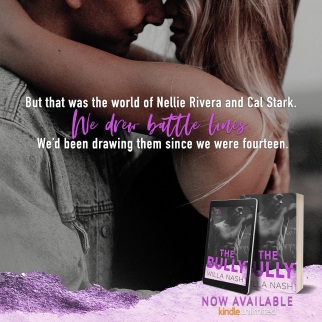 What I hate about this book? It has to end 
This is the ultimate enemies to lovers romance. Holy Moly! Does the heroine hold grudge :0
Nellie and Cal have known each other since high school. They both attended a prestige private high school where Nellie was a scholarship kid and Cal is a rich and famous star. Nellie was always an outcas, and she was bullied quite a bit by Cal. Nellie vowed to stay away from boys like Cal and never fall for his antics. One innocent kiss by the pool changed their life forever. Cal became a star in all Nellie’s journal, and not in a good way :0
Years later, Nellie moved to small town Montana to start a new life with one of their mutual friend’s company. What happen when said mutual friend also invited Cal to move there too since Cal is retiring from pro football?
I like that the heroine is feisty and strong will. The hero is portrayed as a heartless bad boy extraordinaire but Cal is any but … if anything Cal is misunderstood, mainly because he chose the outer image he wants people to see. These two is hellbent on hating each other but physical attraction is a bitch. They can’t stay away from each other even if they tried. Their relationship is all angsts, push and pull, love and hate … so what we have is all heat and explosive chemistry. I like the idea of the diary which give us a glimpse of their past. The HAE ending is long time coming but so worth it. There is a bonus epilogue you don’t want to miss either. Make sure you download it after you are done with the book – super cute. This small town, enemy-to-lover is a wonderful addition to Calamity Montana series and just might be my favorite. Lovely read!!!
PURCHASE SITES
Kindle: https://geni.us/AAKBau
Audible: https://geni.us/MSgFxyW
Paperback: https://geni.us/ABAV2QU
Special Edition: https://geni.us/V3IeR