Review: What About Her by Emma Tharp 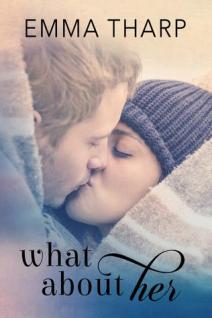 I never read anything from Emma Tharp before and this was a pretty good start to a series. Right off the bat, Katie was attending her best friend Willow’s funeral. Willow has been missing for 6 months – her family is convinced she is dead but Katie has other ideas. She thinks Willow is still alive somewhere out there. River, Katie and Willow had been childhood friends. After Willow’s disappearance, Katie and River’s relationship was strained. But as they both mourn the loss of a friend, Katie starts to spend more time with River, who was Willow’s boyfriend. They have the same classes and same circle of friends. They spend a lot of time together and eventually start to develop feelings for each other or have they had feelings for each other all along?

I like that the story and character development eases nicely from the beginning. I also like the mystery and the surprise as Katie and River find clues that Willow left behind. I am not sure about River’s mother – I don’t get why she is so hell bent on Katie leaving her son alone so he can focus on football; he is a grown man so I am a little suspicious of her. The main characters are college students but sometimes I feel that they are acting younger with all the drama that goes on and with some of the cat fights. I like Katie and River’s chemistry – sweet but also pretty explosive in the romance department.

The book ends in a cliffhanger though so I am anxious to find out what happens next. Over all, this was a short and entertaining read.