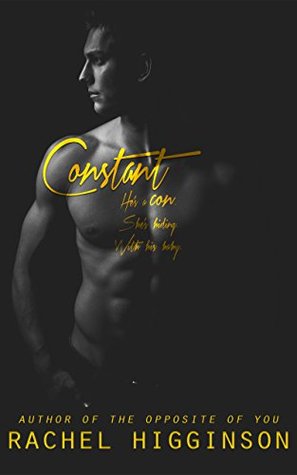 Constant is the first book of the duet The Confidence Game so fair warning this ended with a huge cliffhanger. Thankfully, we don’t have to wait long – Consequence is coming in February. This book was a nice surprise, I had no idea it was a romantic suspense genre with an intense plot and full of twists and turns. Caroline, her best friend Frankie, Sayer grew up together in a dark world of drugs, violent and Mafia crime. When Caroline and Frankie were old enough they escaped leaving everything and everyone behind. Caroline is now with a child, living quietly with Frankie in the suburb of Boston. They have new identities. The dark life seems so far away… that is until Caroline notices little signs that something isn’t right – mysterious packages showed up at her doorstep, the dark window car parked around the corner, and finally the run in with Sayer, whom she left behind 5 years prior. Is Caroline in trouble? Is she paranoid or her dangerous past finally caught up and about to turn her life upside down?

I was hook to this story from the beginning. I love the plot – mysterious, suspense, intriguing which kept me on my toe from beginning until the end. The characters are well developed. Caroline is feisty, strong – the cruel environment which she grew up in forced her to be a survivor – she will do anything to stay alive and to protect her daughter. Sayer is still mysterious to me – I don’t quite know what happened in his youth that Sayer ended up in that dark alley. Caroline befriended Sayer, took him under her wings, and showed him the rope in the dangerous world. I love the relationship between Caroline and Sayer. It was friends-to-lovers romance from the past point of view. In the presence, Caroline is skittish about Sayer. She has a hard time trusting Sayer – how he got out of prison, how he found Caroline and what are his motives? Sayer is very angry with Caroline. They made promises of forever but Caroline took off without a trace. Sayer was helpless sitting in jail, worried sick of what might happen to Caroline, and whether she is alive or dead. Can they rebuild their broken relationship?

The cliffhanger ending was tortuous – Caroline and Sayer finally ready pick up where they left off but tragedy strikes. I believe Consequence will be a thrilling, full of actions and hopefully a lot more on the romance. I cannot wait for the finale to this new series. Another unexpected side of Rachel Higginson and I am loving it.